The product gave me two additional years with my dog Gerry
From 3 seizures daily to one or two during the last few years! 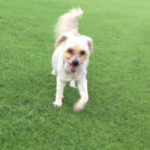 Back four years ago, we had a nightmare case with my dog Samba. She was diagnosed with the chronic phase of Ehrlichia Canis. Her bone marrow was nearly to nothing, blood cells and platelets gone crazy. There was nothing but from three vets suggested to release her from her pain.  After only a week, giving her small doses
of BAC, she “awakened in within” and recovered in miracle time.  She received her first blood transfusion on Valentine’s Day and only 3 months later we moved from Buenos Aires to the Caribbean. A long flight and a lot of moving stress! However… she turns 16 next month and does remarkably well given her age! BAC clearly saved her life! Meanwhile, all my family and friends take it! Thank you from the bottom of my heart!   –  Lela with Samba

The product gave me two additional years with my dog Gerry
From 3 seizures daily to one or two during the last few years!