Also wanted to tell you a couple of great stories.

I have a kitty who showed multiple urinary infections for almost year. The last was when she had a tooth extracted. A few months later she gradually lost the use of her hind legs. We took her to a specialist who performed an MRI and said she felt surgery was indicated as there was some compression to the nerves of the spine. We agreed but after 4 days at the vet without her raw food diet and her BAC F3+, Dolly went down hill and the vet called to say she cultured her urine and discovered she had MRSA of the urinary tract. Now it was all coming together. Seems she had MRSA for some time but because of good food and care she didn’t exhibit symptoms of illness. The vet then said her BUN was 130 diluted and the antibiotic for MRSA would shut down the kidneys completely, therefore suggesting euthanasia.

I said I would pick her up next day and treat her myself and at least have her home if she wasn’t going to make it. The next night I went to pick Dolly up. I kept her on fluids and began giving her BAC with raw food and baby food every 2 hours to equal 3 caps per day. Note: Dolly weighed under 6lbs at this time. I tested her urine every 3 days. 2 weeks later I took her to my regular vet and the MRSA was completely gone, no urinary infection at all.

It has been a year and Dolly’s has gained back her weight and although her back legs are still weak, she is able to walk quite well now with a hind quarter support or towel around her midsection. We recently had labs done and her kidney BUN is still 39. She is a happy lap cat girl and is now 19 yrs young.
Thank You for BAC.

Another girl I have named Sophie showed signs of kidney disease a year ago and so did energy work over the year and increased her BAC to just over 1/3 cap 2 or 3 x a day.  Just had her labs done again and the vet said she has never seen this before, where an older cats kidney stats got better over the year. Sophie is 18 years young.
Again, thank you for BAC.  Note: none of them have any health issues, no high BP, nothing. 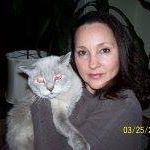 Have a blessed day
Constantina, USA, May 2015